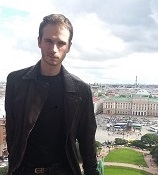 Brandon is a recent graduate of the GJS department with degrees in International Criminal Justice, International Political Science, and Global Studies with a concentration in the Middle East, and a minor in Russian language. While fulfilling the internship requirement for his Criminal Justice degree, Brandon had the opportunity to investigate a cold case serial killer from his hometown. Originally from Hickory, North Carolina, he was the first Appalachian State student to be involved in a summer study abroad in the recently developed partnership with Novgorod State University in Russia, and one of two Appalachian State students to complete a full year exchange program there. He is currently studying at Saint Petersburg State University taking specialized Russian language classes and is in the most advanced language group publically available. In fall of 2017, he will begin studying for a Master's in International Security at NC State, and afterwards plans to work in a governmental capacity using his Russian language ability.