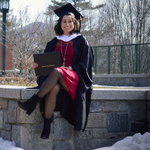 Carolina Izaguirre graduated in 2016 with a degree in Political Science with a Concentration in Pre-Professional Legal Studies and double minor in Spanish and Criminal Justice. She enrolled in the Accelerated Program and received a Master’s of Arts in Political Science with a focus in International Relations and Comparative Politics in 2017. Carolina is currently an organizer for an advocacy organization called Aim Higher Now in Cary, NC. She hopes to one day work for a think tank in Washington D.C. that focuses on global issues, more specially in Latin American politics.

She recalls, "The most memorable experience I had at Appalachian State would definitely be studying abroad in Havana, Cuba during Spring Break 2017. I was able to take a class called Contemporary Cuba with Dr. Scherlen, and the course allowed me to immerse myself in the Cuban culture. I learned more about the Cuban economy, political structure, and culture from a Cuban perspective."